So, I’ve been meaning to start doing restaurant reviews on here for a long time. I was going to focus on Seattle, Ballard more specifically—and then I had such a good experience at Lynnwood’s Good Pho You! that I was compelled to get off my rump and get started. This is

a place I happened into completely by accident on the way home from a dental appointment. I had no other business in Lynnwood.

I saw a sign that said “Good Pho You,” and wondered when I would see the end of Pho-puns like “What the Pho,” which, for my money is still the winner for sheer bawlsyness. I parked, walked into the place and found it to be sparkling clean. Before I could even sit down, a guy behind the counter carrying a baby—Steve, the owner—said from across the room “Hey! For here or to go?”
“For here.”
“Sit wherever you like, man,” he said. 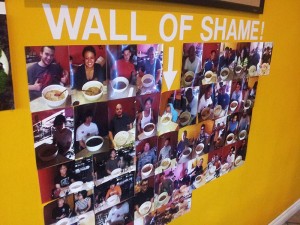 I didn’t, at least not right away, because I was kinda taken with the monster wall full of photos of the restaurant’s diverse menu options, including pho, vermicelli, pad thai, Bánh mì sandwhiches, bubble tea, and desserts.

More compelling, however, was the stack of 40 or so polaroid-like shots entitled “WALL OF SHAME,” depicting vaguely ashamed-looking customers sitting next to giant 1/4 to 7/8 consumed bowls of hot noodles. This, apparently, is a public shaming of customers who have failed the “monthly challenge,”which is to consume a monster bowl of  Phở: 6 pounds of it. Perhaps the challenge rotates monthly.

My experience is that Phở can be pretty, well—standard. There’s not always a lot of variance from one restaurant to the next. But Good Phở You! knocks it out of the park with what I think is the most important thing: the broth. The broth is rich, slightly viscous, and was served at the perfect temperature: hot enough to cook the beef  but just below the temperature required to burn my mouth off. It’s also nice to see some variations within the typical just below hot enough to burn my mouth, which means it’s framkework such as the above mentioned wacky eating challenge that I would usually associate with a roadside BBQ joint.

So, I like some “adventurous” stuff in my noodle soup, including tendon but excluding tripe. Most places put both in the same bowl. I wanted a combo bowl with rare beef, well done beef, tendon, but not tripe, and when I asked him to hold the tripe, Steve suggested instead that I substitute it with “whatever you want.” 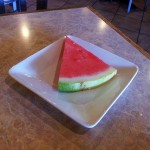 Steve’s a decent guy and you should support his business.

A benefit of having a hoarder habit? When you throw a monitor out of the window it’s OK, kinda. Because you have another one in the basement. Or if you’re like me, two.

Which you will need—but probably not have—if you react to the following video like I did. I actually can’t get through the whole thing.

Via this auction. I don’t get it. I mean, I guess I get it, tough guys love Jesus and want to represent both sides of their admittedly complex (two parts!) personas. But isn’t there something in that dusty ol’ book about humility? Or meekness? Or something like that?

I bet they sell them to these guys. 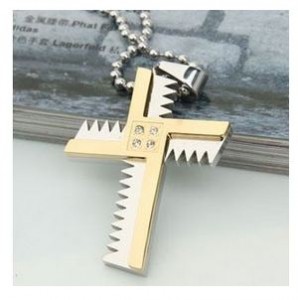 The passive-aggressive will inherit the Earth