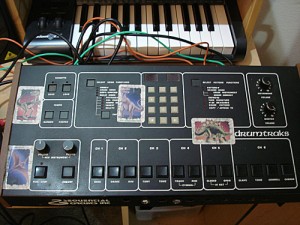 "I don't even know what that is. A friend gave it to me. Two Dollars."

Yard sale, Portland. Almost didn’t go. Amidst a quagmire of baby clothes and dirty suitcases, I spot 2 pieces of stained wood bookending some dated-looking electronics and freeze in my step. I then read 2 magical words: “Sequential Circuits.”

Post-gasp, I ask the dude at the yard sale in Portland: “How much for this goofy thing?” I’m playing dumb, see.

“I don’t even know what that is. A friend gave it to me. Two dollars.”

Sold. I take it to Trade Up Music all of two blocks away. Plug it in, and lo-and-behold it works more or less great. Some trigger switches are clunky and either don’t trigger samples or inconsistently multi-trigger. There’s a couple loose screws rattling around in there, as well.

I’ve dusted out the innards with some spray-air cleaner, including the trigger buttons to little avail. Contact cleaner hasn’t done much to improve their responsiveness, either. All drum sounds respond via MIDI, however, so I know the EPROM chips are fine.

Let’s talk about that. The Drumtraks was released in 1983, when sampling was kinda in it’s infancy and very expensive. As such, each-and-every sound on the Drumtraks has it’s own IC chip in the form of an EPROM. This means that in order to add sounds that aren’t just “stock,” one has to:

I have a lead on an EPROM burner. But first I have to solve this trigger switch problem. 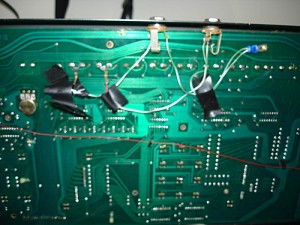 Let’s look at the mods. The previous owner has installed a desk hinge to hold the lid open while working on the guts of the thing. Clever! Also, there are 2 jacks at the front of the beast wired to the Kick and Snare buttons. The music store dudes at TradeUp plugged in some momentary switches to see if these sounds could be triggered remotely to no avail; we also thought that maybe these jacks were trigger out ports, perhaps allowing the Drumtraks to activate other outboard gear whenever the Kick or Snare buttons were pressed. Perhaps we’ll never know. There are 10 holes clumsily drilled into the face, I imagine for other planned mods down the line. 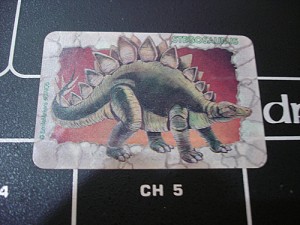 Also of note is the insane connectivity of these older drum machines. It’s got no less than 8 outputs, so the Kick, Snare, Toms, Hats, Percussion, etc. can all be routed to separate effects. I talked to some dudes at work about why drum machines don’t feature this anymore, and we agreed it’s likely because this product is of an era where drum machines were studio gear, and – like a real drum set – every drum would get its own channel on the mixing board. 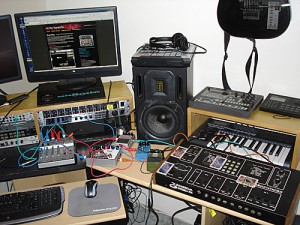 For the past couple of years, I have literally had dreams about finding cool old drum machines at yard sales.A quick scan of Ebay’s completed listings reveals that the last Drumtraks (in admittedly nicer shape than this one) went for $580!