An update: A while back I posted a workaround for setting up keywords in unbaby.me to remove politics from Facebook. Unbaby.me’s original idea was to limit exposure to Facebook’s myriad Anne Geddes wannabees a shade during our social media forays. 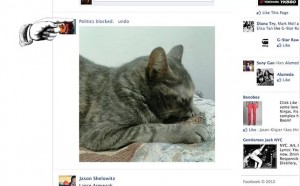 I don’t know if it’s my fault or not, but after I made that post, the makers of unbaby.me recently released the Chrome extension Unpolitic.me, which already has the most-common political keywords factored in.